The Augvape VX200 is a small form factor, high powered dual 18650 box mod constructed from strong ABS plastics that may be one of the lightest mods on the market.

Augvape paired the VX200 mod with three disposable kanthal mesh subohm tanks.The color of the tanks that comes with depends on the body style VX200 being purchased but are available in a smoky black, teal blue, red and clear.

Called Jewels, after the gem style straight edged design, these tanks are made from food grade polycarbonate plastic that are built around what appears to be a standard style 0.15ohm kanthal mesh coil with a 50-70W operating range. The polycarbonate construction can take a fair amount of abuse without being damaged unlike a pyrex (glass) tank.

With a 26mm diameter and 40mm overall height, the Jewels can hold 3ml of e-liquid. The fixed drip tip is 8mm in diameter and gets the job done but could have been slightly taller.

Filling the tank is a simple operation thanks to the silicone plug that reveals a decent sized fill port that works well with both unicorn bottles or glass drippers.

Best at 65W according to the manufacturer, these tanks actually perform well as low as 45W for those looking for a cooler vape but also at the higher end of the wattage range for a warmer vape and brighter flavor profile. 55-60W was a pretty good operating range for an enjoyable vape that has both flavor and clouds but wasn’t too hot for chain vaping.

The flavor is pretty good with plenty of vapor production with the adjustable bottom airflow set to wide open. Performance of this tank is quite similar to the Skynet subohm tank and may actually use a similarly constructed mesh coil, which was also a tank we enjoyed using.

Restricting the air flow does net a more saturated and warmer vape as expected but drawing the air becomes quite noisy.

These disposable Jewel tanks are available separately from the kit, 3 for around $12 which is pretty crazy, seeing as a decent price for coils isn’t that much less. A pretty good, complete tank that won’t break for $4 a piece?

Constructed from a ABS and polycarbonate plastic polymer, the VX200 box mod has both an incredible light weight and structural integrity. Some people might think that the mod may be easily broken but ABS plastics are quite sturdy and resistant to both moderate impacts as well as chemicals, which is why the plastics are used to construct everything from lego toys to power tools.

The construction materials used also give the mod its color profile without the need of paints, so no chipping from use and abuse. Augvape gave the VX200 an almost futuristic design, clearly inspired by more modern cell phones with curved glass faces but without the glass in this case. 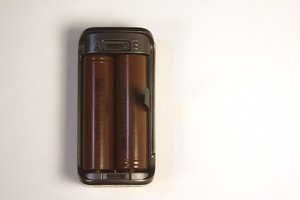 Coming in at under 2oz, pretty much all the weight in the kit comes from the batteries and full tank. The form factor is also quite small, not much bigger than the two 18650 batteries themselves.

The battery bay has large direction indicators which is secured with a magnetized door that matches the front. There is no rattle from the mod, even with a vigorous shake, but there is the slightest amount of play at the top of the door when pressed from the side.

At the top is the spring loaded, centrally located 510 pin, which can handle up to 28mm diameter tanks with no overhang. With such a light weight box mod, putting on a super sized vape tank will make the overall kit feel a bit top heavy though it will probably still look pretty good.

On the front is the increment-decrement buttons, just above the firmware upgrade USB slot and the 1.3 inch color LED screen. Indoors, the color screen is bright enough for easy reading, but invisible when not lit thanks to the tinted front face. Outdoors however, the screen becomes quite dim.

Display colors have several preset options including green, blue and red but it is color customizable to essentially any RGB based color blend, which is pretty cool.

The display is quite well designed and quick to read at a glance, making good use of a radial dial to display firing time. Pressing the fire bar three times will give access to a simplified and easily navigable menu system. One of the cooler menu features is a information area that has all sorts of statistical data about how the device has been used.

Most vapers will generally stick with the variable wattage firing mode, capable of firing from 5-200W adjusted in single increments (nice) and wide firing range of 0.05 to 3.0 ohm, which is versatile enough to satisfy all types of direct wattage vapers.

The mod is also capable of four temperature control modes, SS316, Ti, Ni200 and TCR, as well a bypass (mech style) mode and there is even an automatic settings option in the menu. Temperature mode is controllable by degree only.

Firing the mod by squeezing of pressing the side fire bar gives a satisfying click and is fast to fire, with the action only triggered by pressing the top half of the bar.

Overall, the Augvape VX200 has been pretty enjoyable to use. The size of the kit is compact, even the price. Best of all, the mod feels comfortable to use and functions well, particularly with direct wattage mode and the disposable Jewel sub-ohm tanks produce lots of flavorful vapor.